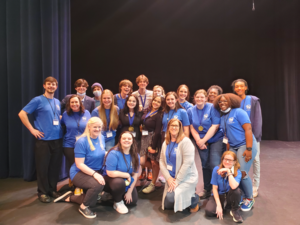 Several Dorman students were recognized for their outstanding work. Click the link above for more information.

The Dorman Theatre Department recently participated in the SC Palmetto Dramatic Association's High School Festival. This was the first in-person theatre festival for high school students in South Carolina since the pandemic began and we were privileged to host our guests here at Dorman. The facility was buzzing all weekend with excitement and gratitude that we were finally able to come together again safely after two difficult years apart. Our students were gracious hosts as well as incredible performers. We received numerous compliments on the Fine Arts Facilities, but the most impressive comments were reserved for our young students.

The following awards were received:

100% of all our Solo Musical submissions received Superior ratings!