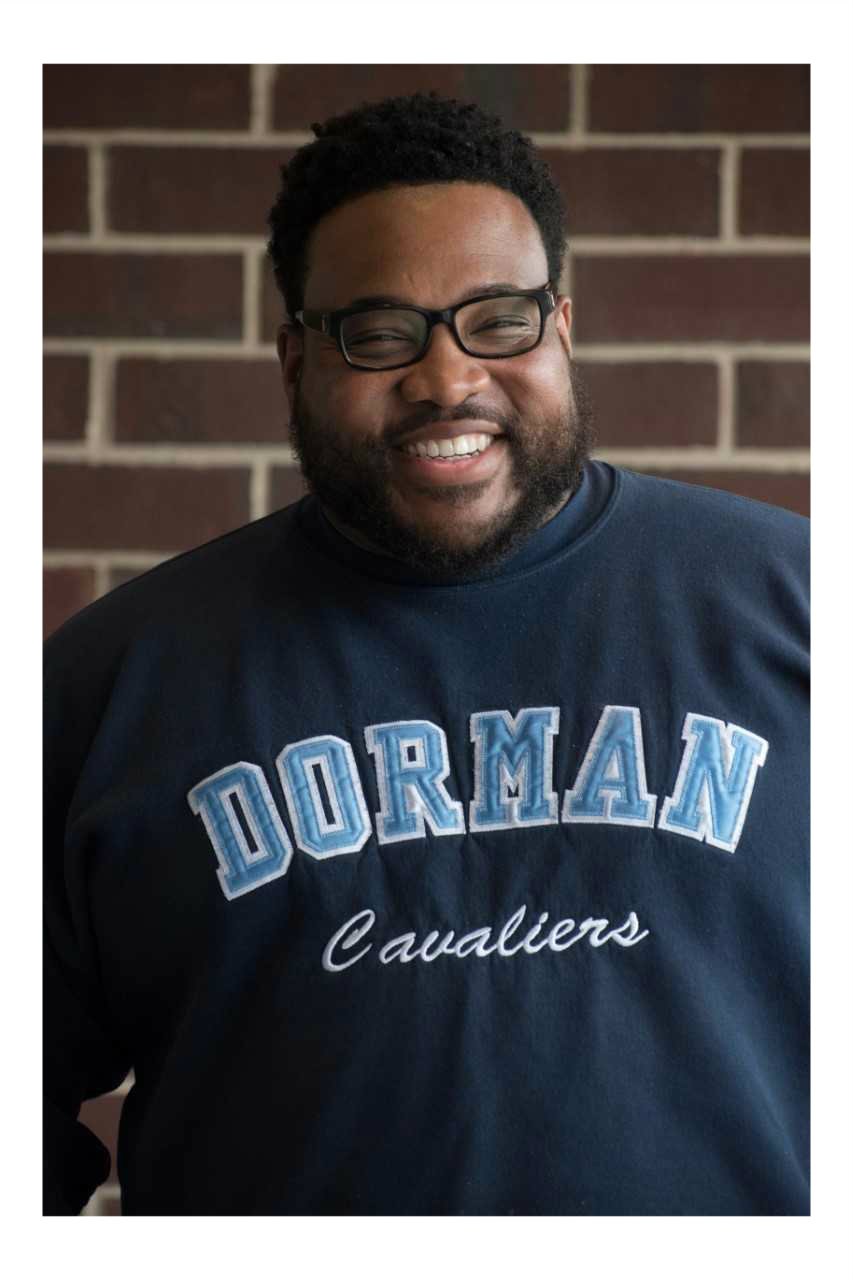 
I received a Bachelor of Arts degree in Studio Art from South Carolina State University in 2001, and Master of Arts in Teaching in Art Education at Lander University in 2007. As an undergraduate student, I worked with my professor, Dr. Terry K. Hunter, in matting, framing, and hanging shows for professional artist at S.C. State University and Claflin College. In addition, I worked as an assistant to Dr. Kod Igwe, teaching several Art Appreciation classes at S.C. State University. Upon graduation, I began my teaching career as a long-term substitute resource teacher in Dist. 5. After working two years in Dist. 5, my career changed to that of being a supervisor for the WestPoint Stevens Textile Company located in Calhoun Falls, SC.  After two years of working there, the textile plant closed down and I pursued a Master’s at Lander University. After completing a Master’s in 2007, my first teaching and coaching jobs came at Calhoun Falls High School, where I was the only art teacher for one year. Upon Calhoun Falls High School’s closure in 2008, I began working at Dorman High School.  I remained there for 10 years teaching art and coaching football along with track and field. I am married to Lakeshia Fowler-Bomar and have two wonderful kids, Tylen and Cameron who both attend Dist. 6 schools.


I currently serve as a member of the SCAEA, NAEA, and the SCACA. I enjoy watching anime and superhero cartoons, doing my own art, having art challenges with my students, and spending time with my family above all. 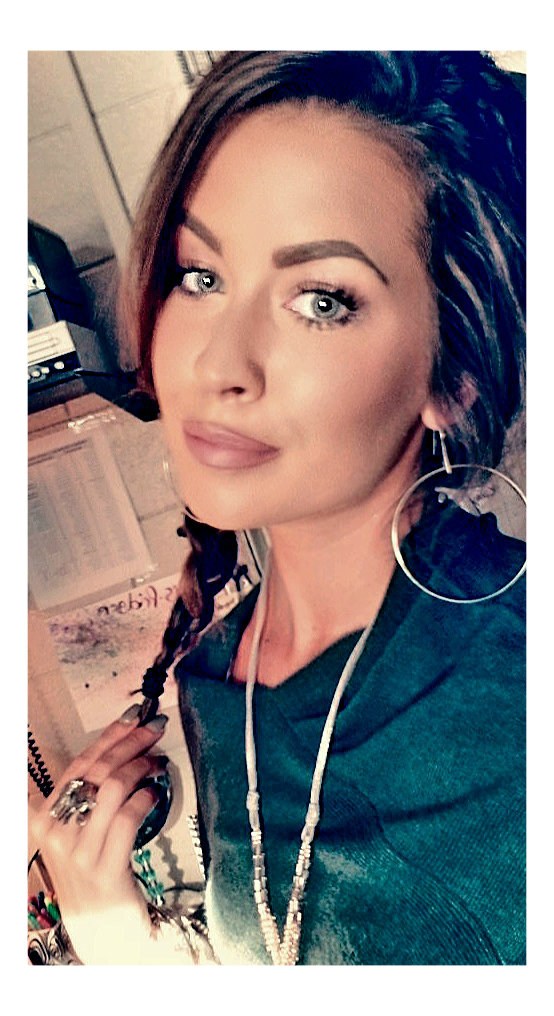 I grew up in Spartanburg, SC and participated in the gifted art program all throughout my District 6 education. I had a love for visual arts at an early age.  My Elementary art teacher noticed this in 2nd grade and made sure I went through the Art Visions process and selected for Art Visions. I continued experiencing and growing in the visual arts all through grade school until graduating from Dorman in 2004. From there, I attended Clemson University after being accepted into the arts department for studio art. I was able to take a variety of courses that allowed me to become more knowledgeable in all areas of visual arts, as well as develop my own art craft. While at Clemson, I participated in a Study Abroad Program in Italy for three and a half months and a Visual Art Study in New York for 2 weeks. I graduated from Clemson in December 2009, receiving a Bachelor in Fine Arts with an emphasis in Drawing, Figure Drawing, and Printmaking. After graduating college, I was hired as an art teacher in District 6. I taught at Fairforest Middle School for 3 years before moving to the Freshman Campus for the past 4 years.  I teach Art 1, Design Principles, and Art 1 Visions (gifted). Throughout my teaching career, I have furthered my education by earning my Gifted and Talented certification, AP Studio Art certification, participated in the South Carolina Arts Leadership for Success Academy, and attending the Creative Arts Teaching Institute in Charleston, SC twice. I have a passion for art and continue to look for new avenues to promote the Arts for all to enjoy. I have always been proud to say that I am a Dorman graduate... Now, I am happy to be able to teach students in the same district that paved the way, challenged, and encouraged me in all areas of study but most importantly laid the foundation of my passion for visual art. 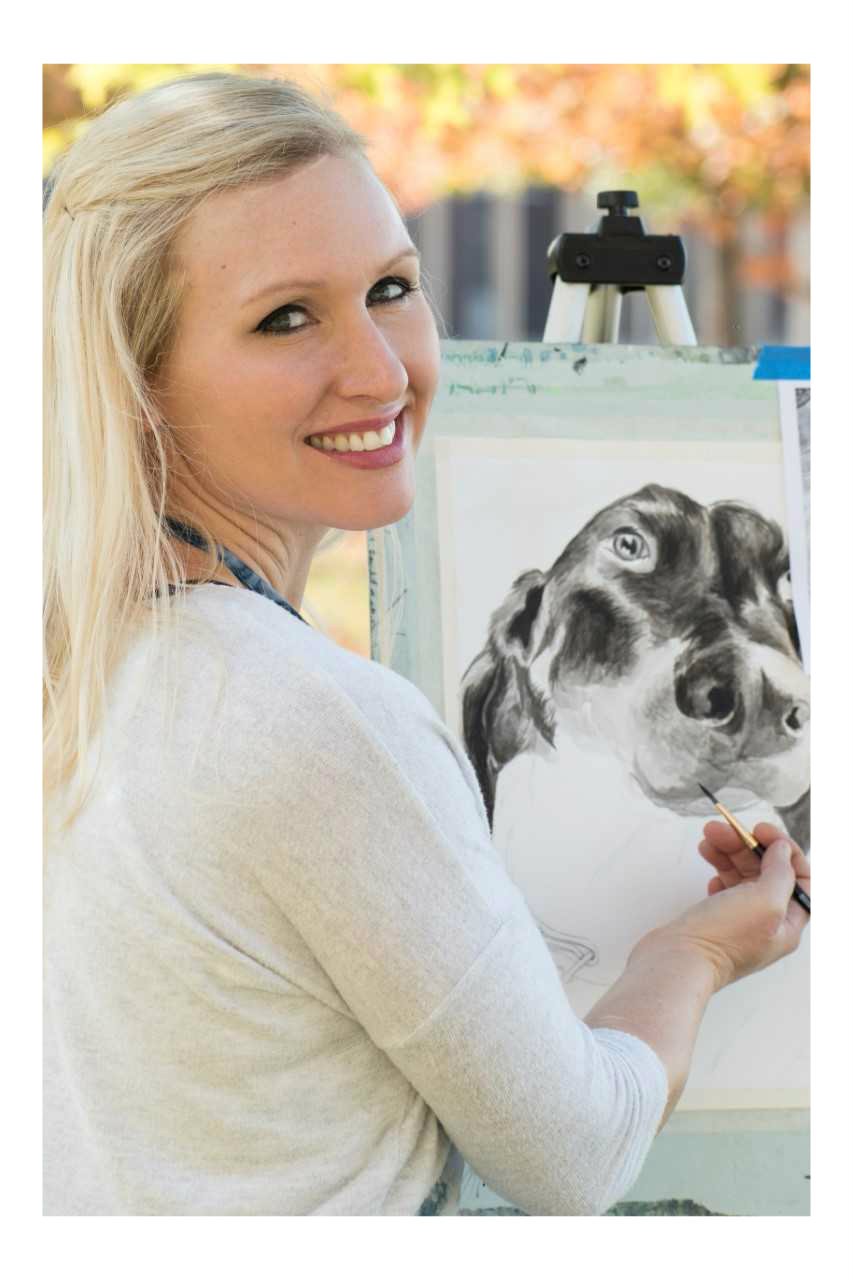 I was artistically influenced by my grandmother, who would take me to a nearby pond, set up our easels, and paint with me. We also shared a love of nature and animals, which are always present in my work. My preferred subjects are cows and canine family members. I can often be found in my neighbor’s pasture, camera in hand, luring in cows with apples, carrots, and their favorite treat, granola bars! I would describe my style of painting as playful and serene with a fondness for unusual viewpoints. I am always excited to see new perspectives on subject matter and techniques, which I learn from other artists, as well as my students. Creating art, and teaching students to find happiness through art are my greatest joys.


I attended the University of South Carolina in Columbia where I received a BFA in art education. After beginning my teaching career in Spartanburg School District 6, I attained a Master’s Degree in Gifted Education in 2004 and National Board Certification in 2006. My educational journey continued, and I soon received my Ph.D. in art from the University of Georgia. District 6 remains my “home” where I have had the privilege to teach at Jesse S. Bobo Elementary, R. P. Dawkins Middle School, and Dorman High School.

In addition to teaching Painting, Advanced Painting, and foundations courses, I am also an adjunct professor of art history and art education. I am an active member of the South Carolina Art Education Association, and the National Art Education Association. My passions outside of the classroom include baking (I am a cookie connoisseur), and going for walks with my husband and our spoiled-rotten hound dog, Abby. 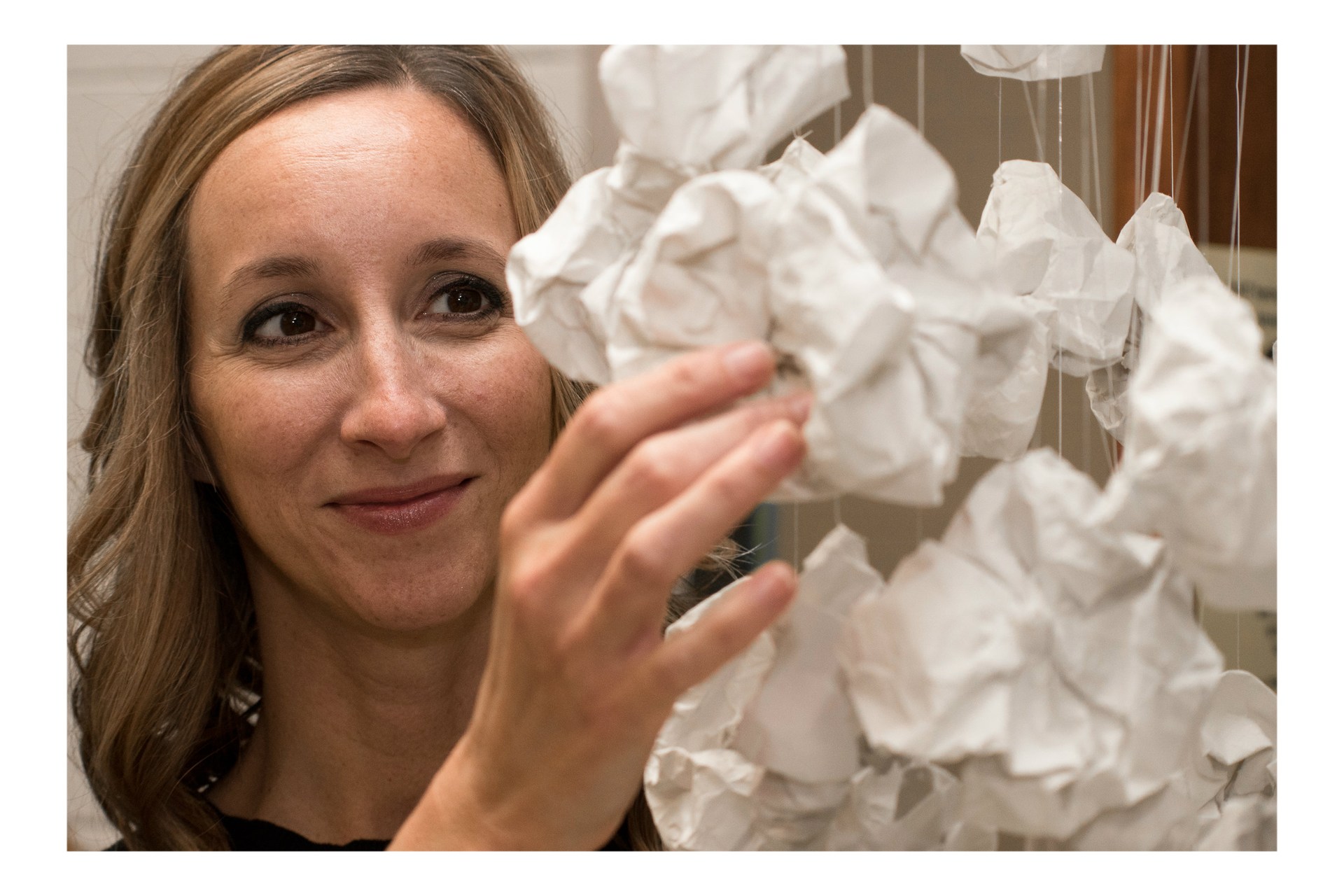 I first embraced visual arts during my middle school years as my art teacher inspired me and helped develop my passion for art. I participated in visual art throughout middle and high school in my hometown of Woodruff, SC. I attended the South Carolina Governor's School for the Arts during the summer prior to my senior year. During this experience, I found that I wanted my life forever rooted in the arts. My commitment to visual arts stemmed from my motivating teachers, visits to Art museums, and high school Advanced Placement Studio Art coursework.


Outside of the classroom, I find time to hike, kayak, and travel with my two children, husband, and Boston terrier. I enjoy finding time to create mixed media art. Through my adventures, I am inspired by nature and the world around.

﻿My earliest memories involve art from my childhood in Wisconsin - drawing in notebooks and going to art exhibits with my older brothers. One significant moment in my artistic development was seeing a Van Gogh retrospective in Chicago. After moving to Columbia, South Carolina, I was fortunate to have several outstanding art educators throughout my adolescent years who fostered my development as a young artist. My high school art teachers encouraged me to apply to the South Carolina Governor’s School for the Arts. I was accepted into the program, and attended after my sophomore year of high school. It was at the Governor's School for the Arts that I truly recognized my passion for art; I knew then that art would be a major force in my life.

During this same time I became involved in another life passion - distance running. My love for the freedom of the open road or trail as a runner, and later as an avid bicyclist, profoundly influenced my appreciation for the outdoors. Nature continues to provide ample motivation for my creative pursuits. Endurance sports provide me with reflective time to meditate and the ability to look inward while taking in the beauty of the landscape.

The Art Department at the University of South Carolina provided a strong foundation for my college years. While at USC, I completed a concentration in drawing, and worked to create a series of three-dimensional paintings. After earning my BFA in 1990 from USC, I packed my art supplies and moved to California to pursue graduate work in studio art at California State University, Sacramento and the San Francisco Art Institute. While there, I took my interest in "3-D paintings" further and created several installations, as well as earth art.

Eventually I returned to South Carolina and enrolled in graduate school to become an art educator. As a young artist, I had been given much encouragement by my own art instructors and felt it was now time to try to do the same for the next generation of artists. I completed a Master's degree in art education, then spent five years teaching in the Columbia, SC before accepting my current position at Dorman High School in Spartanburg, SC. I teaches a variety of art courses, including Advanced Placement Art.

In 2007, I was awarded the South Carolina Secondary Art Educator of the Year Award. My work was selected for inclusion in the inaugural international art publication Art Buzz: The 2008 Collection and the 2011 Collection. I was selected for the book, Artists Among Us: 100 Faces of Art in Spartanburg. In 2015 I was one of eighteen Upstate South Carolina artists whose artwork was selected for inclusion of the interior of the Greenville Aloft Hotel. My artwork is in collections throughout the Carolinas, the United States, Denmark, and South Korea. 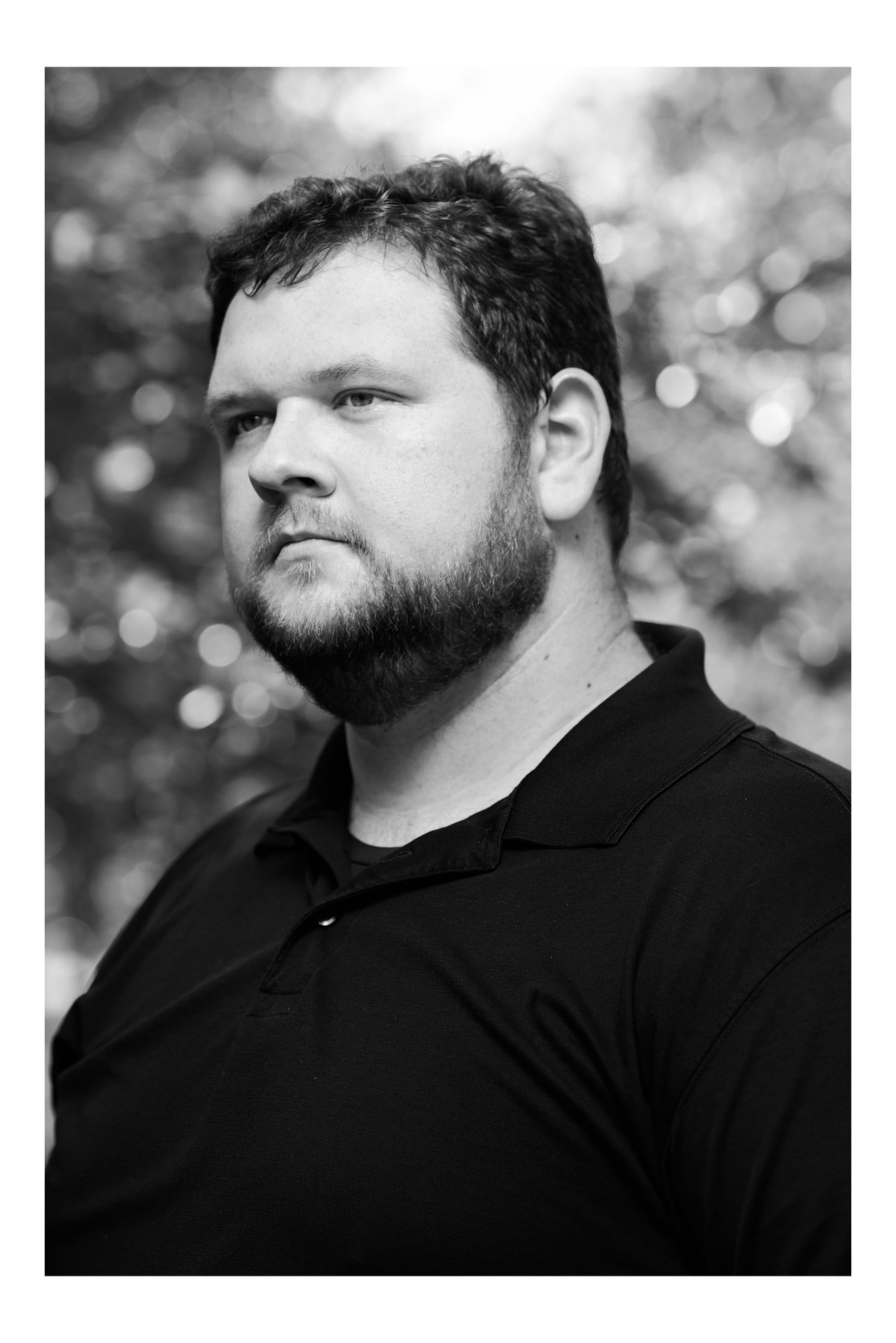 I grew up in York, SC. I took several art classes in school, including an intensive summer program at Winthrop University, but I never really considered myself an artist. Looking back, I probably took more photos than the average kid, but I was never serious about it.

I originally intended to be a high school English teacher; I earned a Bachelor’s in English Language and Literature from Wofford College in 2006. However, after taking a digital darkroom class, I learned that I really liked taking pictures and also had a knack for it.

I spent a year learning and practicing photography, and was the first student to have their work exhibited at Martha Cloud Chapman Gallery at Wofford. I interned as a photographer at several businesses, including at a newspaper in Alaska, a with both professional portrait photographer, and a professional product photographer. I also traveled across the South, along with a veteran photographer and several writers, to help publish a book on contemporary Southern culture.

After graduation, I began teaching English at Dorman in 2008. In 2009, I took over the video production, and in 2014, started the photography program, which has since grown to include over a hundred students per year.

For the past decade, I have run my own business as a portrait, wedding, and event photographer in Upstate SC. I am also enjoying spending time with my wife, our son, and our two dogs, and for fun, I like to cook, to shoot and develop film, and to play video games. 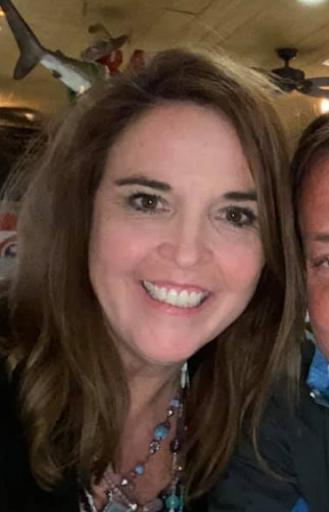 I am a native of Sumter, SC. In high school, I took art and design classes which led me to Winthrop University undergraduate degree.  I attended  Francis Marion University for my Master’s Degree in Education.  I have taken Art Graduate classes at USC and the College of Charleston to continue my education throughout the years.   I have been teaching for 27 years in the public school system.  In Sumter, I was the Youth Art Director for the Sumter County Fair.   I enjoy teaching all ages and currently travel to different schools in District 6.  In my free time, I  enjoy painting, building with clay, and spending time with my busy family.  I have taught in different types of classrooms but the art room is my “Happy Place.”